The other day I talked to you about a few of the big mistakes I constantly made whenever I would decided to use my time better and finally become more “productive.”

Mistake #1: Going for the “Big Drastic Change” instead of small, consistent improvements.

Mistake #2: Radically upending the way I approached my day, thinking the more “complex” (i.e. complicated!) the system, the more it would help (when the opposite is true).

Mistake #3: Trying to barrel through obstacles by way of sheer willpower and figuring that if it didn’t work, I just wasn’t “good enough,”

After I published that blog post, I took my dog for a walk in Central Park and I started thinking about why I used to think like this…

Where did all of these beliefs and false assumptions come from?

Peek into my inbox

At the end of our walk, I stopped in to my local bodega (newsstand) and as I was waiting to pay for my pack of gum, it hit me! Well, actually it came to me next to a picture of Zooey Deschanel:

I realized that I’ve been bombarded with messages like this my whole life and with the rise of the Internet and social media, it only seems to be getting worse.

On the surface, this title looks harmless enough but here’s the problem, it’s not possible or sustainable (at least not for me or anyone I know).

I go to the gym on a regular basis, I’m in considerably good shape and feel very comfortable working out…

Identify the 20 most influential people in your existing network 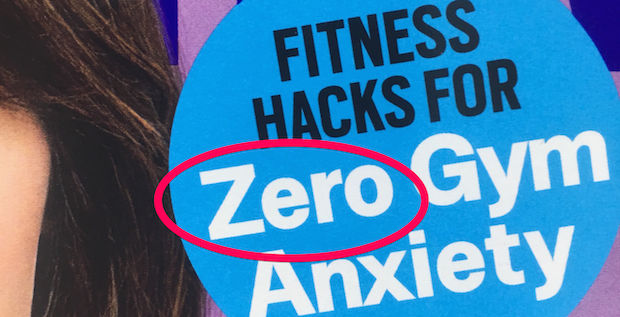 BUT I can’t remember the last time that I had NO anxiety or didn’t feel a little self-conscious at some point between walking in the door to exercising to showering after!

And then I think back to when I first started going to the gym as a “newbie” and how I felt -> ANXIETY OVERLOAD!

And it was completely okay and right for me to feel that way (I’ll talk to you about the importance of something called “optimal anxiety” at another time).

But what if I was judging myself against a promise like this headline?

And then I’d just give up in exhaustion and go back to watching Netflix because that was a whole heck of a lot less stressful (even if I wasn’t happy). 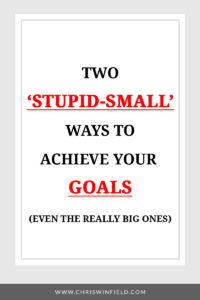 So what does this have to do with being more productive, successful and happy? Everything! Let me explain…

Messages like these are everywhere and (thanks to the addiction we have to our phones) at any minute of the day.

“The one simple food that will change your life — and your waistline — forever!”

“Regrow your hair — overnight — with this simple secret!”

We roll our eyes and know it can’t be that easy…but still we click, swipe our credit card, or skim through the article…in hope of some “magic cure”.

We’re addicted to immediate gratification, and even better if it comes packaged in a shiny package.

Before we go any further, I want to share a picture of the amazing “tool” that changed my life (side-note: I still feel a bit weird every time I share this because it’s so….well, you’ll see.)

I know. It sounds totally ridiculous. And if you’d told me a few years ago that I’d be saying this, I wouldn’t have believed you for a second. But stick with me here…

After all, you’ve already heard about my (pizza inspired) wake-up call, and then we talked about the “penny trick question” that demonstrates the most effective way to achieve more FREE time in your life.

You need to stay around for the big payoff and hear how flossing turned me into a “productivity millionaire”! 🙂

If this post has been helpful so far, get yourself a free worksheet to fill out and help achieve all your goals. Click the button below to grab one now!

Here is your FREE Worksheet
Anyway. Back to the flossing.

First, tell me if this sounds familiar:

> You get inspired by something (it could be an awesome speech at a conference or maybe the start of a new year and the inevitable resolutions that come along with it).

>> You decide you want to conquer a big goal. Let’s say, “getting in shape”. You’re all in. Only problem is, you haven’t been to the gym or done any real exercise in…oh…maybe two years.

>>> But that’s not going to stop you. You’re committed! So you go and you workout hard and you’re super-proud of yourself because you’re going to do this. This is FINALLY going to be it!

>>>> The next day, you work out even harder. You’re convinced this is your new life! You got this 🙂

>>>>> The only problem — your muscles aren’t on board. You wake up the next morning and you can barely walk, let alone lace up your shoes for another run. Plus, you’ve still got so much other stuff to do, right? So…

>>>>>>> And then the next day is EVEN busier. And you’re still kind of tired and sore and you just don’t feel like exercising and you think to yourself “I’m so busy and I don’t have time to spend an hour at the gym today. But I’ll definitely get there the next 5 days in a row!”…and you might even believe that.

>>>>>>>> And then the same thing happens the next day. And that one missed day has now turned into three (aka “habit suicide” which is something else we’ll talk about another time). And then those three missed days turn into a week… turn into a month… which really means…

Now, let me just tell you…

I’ve repeated this cycle more times than I can count. In fact, I did it so much that I even gave it a name:

We somehow think we can go from couch potato to super-athlete overnight, and then we’re constantly surprised when it doesn’t quite work out that way and then we’re left wondering, “What happened?”

And we do the same thing in other areas of our life, too.

I was a perfect example.

I wanted to play more with my daughter, work out every day, eat better, meditate, write thank-you notes… and I wanted it NOW, just like that bratty girl from Willy Wonka:

I had a huge long list of who I “wanted” to be and to be honest, I had most of the knowledge on how to do it, but one night as I was getting ready for bed and I opened up my medicine cabinet and looked at that floss, a lightbulb went off!

A few times per month…at best.

But hardly a night went by that I didn’t THINK about flossing. And giving flossing that teeny bit of mental energy would cause me to feel just a little bad about myself (hey, I told you this was going to be embarrassing for me!)

Because I would look at the floss, know I should just pick it up and do it, and instead unconsciously think to myself, “Nah, not tonight. I don’t have enough time and I just don’t feel like it. It doesn’t really matter — I’ll do it tomorrow.”

One night (about 48-hours after my “wake-up call” in the kitchen), I realized that I’d been saying, “maybe tomorrow” for about two decades. I grabbed the floss, set the stopwatch on my phone, pressed start and began to floss.

I realized that flossing takes me 53 seconds! (Sidenote: I’m not a dentist nor do I play one on TV so I don’t know if that’s too short or too long but it works for me 🙂

And then it dawned on me — I wanted to…

To be honest, this bummed me out at first. I just added it to the long-running mental checklist of things that I had “failed” at.

But then I had another thought…

If all my previous attempts at “becoming a better person” had failed, what if I just did the exact OPPOSITE of everything I’d done before? Just like Jerry’s advice to George in the 86th episode of Seinfeld, appropriately titled “The Opposite”: 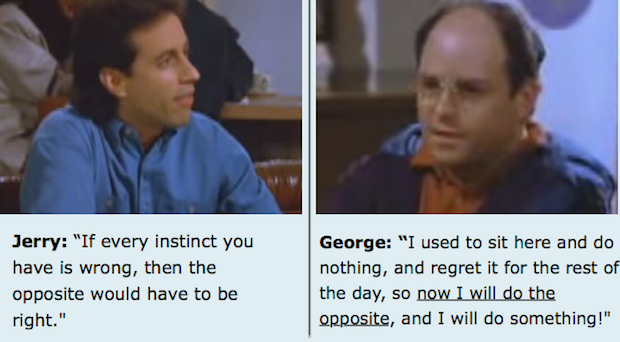 What if instead of trying to get in shape overnight…I just committed to exercising for five minutes?

Or instead of trying to get everything done on my super-long to-do list…I just focused on getting the most important task done and making my to-do list a heck of a lot shorter?

And here’s where it all started to come together…

What if instead of telling myself that “I HAVE TO FLOSS EVERY SINGLE NIGHT NO MATTER WHAT!”…I just committed to flossing ONE TOOTH tonight? And then I could do the same thing the next night.

What if I broke my goals down so “stupid-small” that it would be almost impossible to fail?

Yeah, I could do that. That seemed achievable.

…even “good change” (like when you are going to start a new job, expecting a child, going on a date or any of the other million good but nerve-wracking things that come up in our lives).

So in order to overcome that internal resistance, I just had to get started in super-simple and achievable steps (that wouldn’t set off the fear or overwhelm response in my brain).

And once I got started with a super-small action (30 seconds of meditation, 5 minutes of jogging, whatever), I’d naturally want to keep going since I had was moving forward (even if it was small at first).

I’d start with that one tooth and realize, “Hey, this isn’t so bad. I’ll just go ahead and floss ALL my teeth.” (Since I knew it only took me 53 seconds, it was even easier to keep going. I highly recommend TIMING whatever task it is that you’re avoiding. Chances are, it takes way less time than you think it will.)

But it doesn’t stop there, either…

The second part of my “productivity millionaire” secret is called Don’t Break the Chain. (sidenote: this technique is sometimes referred to as the “Seinfeld System” because Jerry Seinfeld is credited with inspiring it).

This one is SUPER simple too.

Here’s all you need to do:

Your only job is -> DON’T BREAK THE CHAIN!

If you want a free copy of a wall calendar with the whole year on it and practice not breaking the chain, click the button below. You can print it out and mark it up!

Here is your FREE Worksheet
I like this method because it starts small and BUILDS. That chain gets stronger with each “X” you add to it. So with my earlier “flossing” example:

Flossing is simple. But flossing everyday seemed overwhelming to me when I thought about everything else I had going on.

So, it took breaking it down into something so simple — so “stupid small” as I call it — that I was able to…
> take that first step,
>> which allowed me to take the second step,
>>> and those steps became turned into chain of “small wins”,
>>>> which eventually resulted in really BIG improvements in every aspect of my life.

For the last few years, I’ve used simple techniques like this to turn my positive commitments into habits that I can actually keep.

And then I could build on those habits and turn them into a daily routine that has helped me to achieve levels of success, freedom and happiness that I never dreamed would be possible for someone like me (you know, ordinary mortal with no huge resources or special skills…).

This is really simple. And it’s really powerful!

Want to put this to work for you? Here you go…

Leave a comment below and tell me the first things that came to your mind!

Want to get more stuff like this? Get Free Email updates! 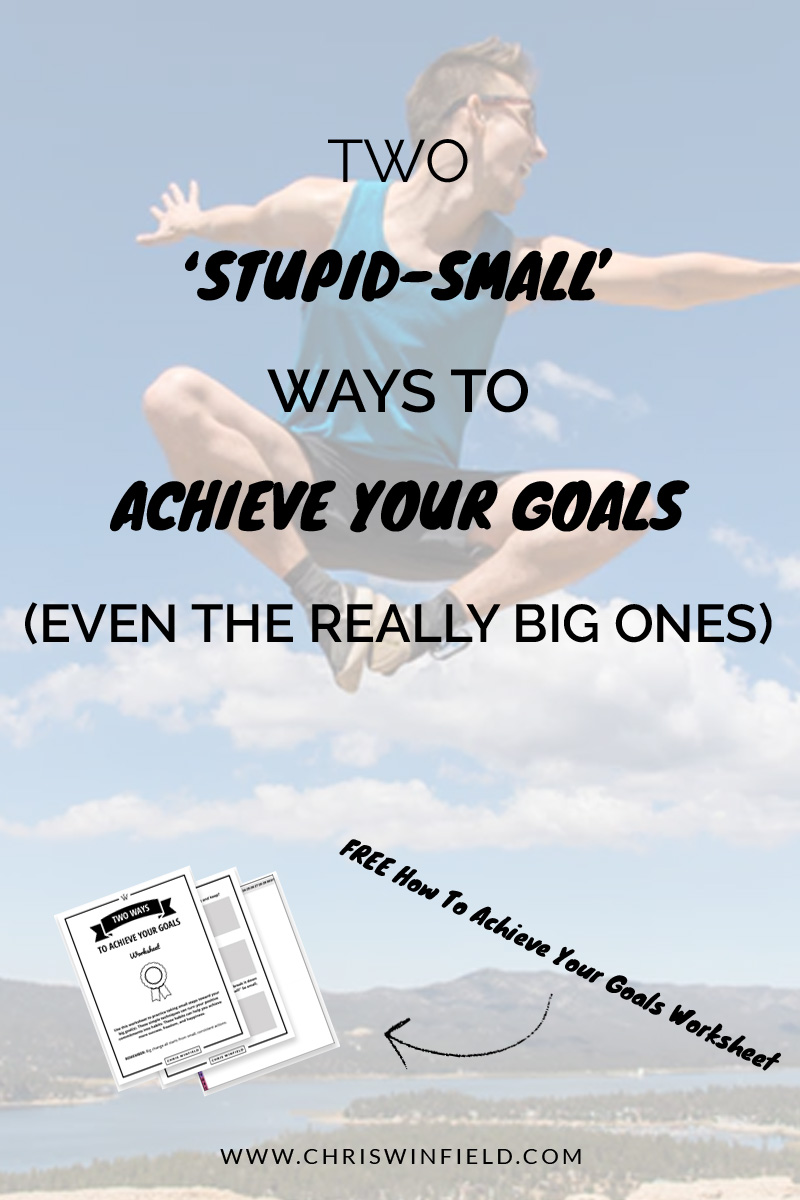